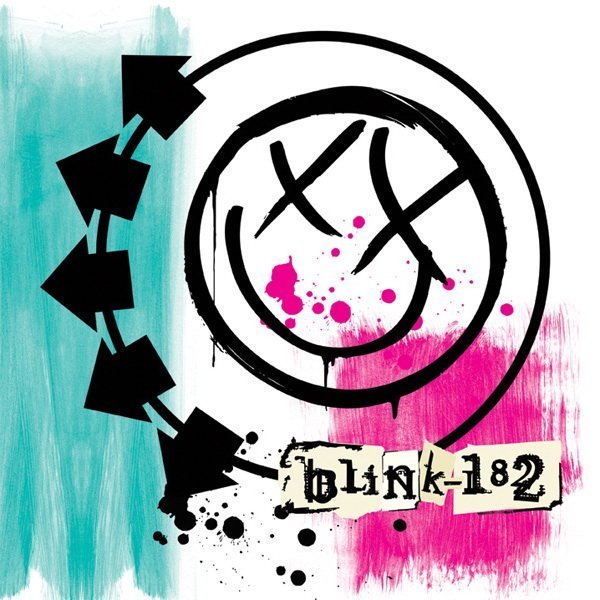 Blink-182 is the famous American rock band formed, which was formed in Poway, a suburb of San Diego, California, in 1992. The above font shows the very first Blink-182 logo as seen on the cover of their debut album, Cheshire Cat. That logo features the band title in lowercase in a serif font. The font used is Times Bold.

The second album of this band Dude Ranch saw a newly designed logo, which features the Blink-182 in all capitals in a slab serif with a star on each side of “182”. Rockwell font is probably used. The logo has been seen on the cover of Enema of the State is probably sans serif fonts. Similar fonts for them are Helvetica Bold Oblique for “blink” and Trade Gothic for “182”.

Another Blink-182 logo and “blink” is still in Helvetica Bold Oblique, but Futura Book for “182”, as seen on the cover of Taking Off Your Pants and Jacket, released in 2001.

The smiley face logo, first appeared on the cover of their self-titled album released in 2003, features a “smiley face” with X’s for each eye and five arrows on the left side of the face, under the logo is the grunge lettering of the album name “Blink-182”, which resembles a font called Resurrection. The font is available in uppercase letters, lowercase letters, numbers, and limited punctuation marks. You can download the font for free here.

If you do not want to download and install the font but just like to create simple text or logos using Blink 182 Logo Font, just use the text generator below.

The following tool will give you option to create images from your desire text using Blink 182 Logo Font, You can download image using right click after generating it. You can place image link at any place.